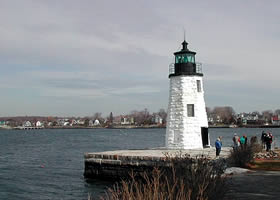 Dr. Donald Zinn, URI Professor of Zoology at URI from the 1940s until the 1980s, was president of the National Wildlife Federation for two years in the late 1950s. In 1991, about a year before he died, Dr. Zinn mailed ECRI a rolled-up, large photo of the 1951 RIWF's Annual Meeting which took place in the Providence Biltmore Ballroom. In this picture, everyone is seated at their tables looking at the camera. The photo was framed and is mounted on the wall of the Environment Council of Rhode Island's (ECRI) office.

Under the stewardship of Alfred Hawkes, executive director of the Audubon Society of RI from 1958 to 1991, ECRI was created as a Rhode Island nonprofit corporation in 1972. RIWF was disaffiliated from NWF, and ECRI became the state affiliate of NWF. During this time, NWF was the conservation organization with the largest membership in the world, approximately five to six million members. In the mid-1970's, NWF staff size approximately equaled the staff size of the nine next largest national environmental organizations combined, and NWF had state affiliates in all fifty states.

For ECRI, water issues were a focus in the early 1970's, but fighting the construction of a nuclear power plant in Charlestown soon became the focus in the mid-1970's. Most funds to fight construction of the nuclear power plant were handled by ECRI. The nuclear power plant project was defeated by an act of the General Assembly in 1977. The RI Department of Environmental Management (DEM) was formed in 1976 bringing together a variety of smaller agencies. William Harsch was the first director. In the late 1970's, the greater Providence sewer system became the focus. In 1980, funds raised by Trudy Coxe and others at Save the Bay were processed by ECRI to pass the largest bond issue in state history, $86 million, to create and finance the Narragansett Bay Commission (NBC.) Louise Durfee, who later became DEM Director under Governor Sundlun in the early 1990s, was the attorney for NBC who negotiated the takeover of the system from the City of Providence to NBC in the early 1980s. ECRI also worked during the 1980s with DEM Director Robert Bendick, who served under both Governors Garrahy and Diprete, to improve enforcement and to revitalize state parks and beaches.

In the late 1980s, ECRI addressed state solid waste policy. Only Rhode Island and New Hampshire did not have bottle bills on the northeastern section of the North American continent. The other New England states, New York and the eastern Canadian provinces did have returnable bottle laws. In 1985, ECRI did manage to get a bottle bill through the House of Representatives, but could not win over the Senate leadership. Determining the right mix of recycling, landfilling, and incineration became the major policy issue. No state yet had mandatory curbside recycling - parts of Ontario province did. The environmental community became split between whether to support having one state incinerator or not. ECRI was at the forefront of negotiating having Rhode Island be the first state to adopt mandatory curbside recycling. Some folks agreed not to fight one incinerator to bring about this achievement. Rhode Island did become the first state to adopt mandatory curbside recycling. After this occurred, about half the environmental community successfully persisted in convincing the General Assembly to ban municipal waste incineration in Rhode Island and set a seventy percent recycling goal for the state.

In the late 1980s and early 1990s, ECRI also addressed DEM reorganization and fighting severe state budget cutbacks at DEM by Governor Sundlun. ECRI and other parties successfully convinced the General Assembly to fund a DEM reorganization study at the $150,000 level and then passed a DEM reorganization bill in June, 1990, but the Sundlun Administration, elected in November, 1990, failed to implement the legislation. In regard to DEM budget cutbacks, Governor Sundlun wanted to set the state general fund budget for DEM at under $12 million in 1993 and DEM Director Louise Durfee resigned in protest. The state general fund contribution to the DEM budget in 2002 is $32 million.

In 1993, DEM began honoring individuals who through uncommon effort “immeasurably advanced the preservation, protection, and enhancement of the natural resources of our state” with The Alfred L. Hawkes Award for Conservation and Environmental Accomplishment. In the words of John Campanini, Providence city forester and the Alfred L. Hawkes Award honoree for 1999:

"Mr. Hawkes is a true environmental colossus whose lifelong work on behalf of wildlife protection and conservation will continue to benefit present and future generations of Rhode Islanders for many years to come. I am humbled to think that through this award, in some small way, I will forever be linked to this great man and his wonderful work."

* Changes in leadership generally occured at the annual meeting in June of years cited.