NOTE: Photos and videos of the speakers follow this summary.

After the tour, the meeting convened for a dinner prepared by Harvest Kitchen and a speaking program introduced by newly elected ECRI President Priscilla De La Cruz.

The first keynote speaker, Erika Niedowski of the Acadia Center, started off by emphasizing the urgency of climate change. With the rapid progression of sea level rise and extreme precipitation events, Niedowski noted, there is no time to squabble over emissions targets. She urged stakeholders to act to decarbonize the economy as quickly as possible and reviewed current legislative efforts in Rhode Island to help accomplish this goal.

Afterwards, Tom Kravitz explained the decision-making process for the siting of the renewable energy projects that were shown on the tour. He described changes in land use in North Smithfield in the last century, including his efforts to maximize the economic benefits of renewable energy to the Town and his long-term plans for the sites. The speaking program concluded with a Q&A, which reflected on how to balance stakeholder interests throughout the siting process.

The Environment Council of Rhode Island extends its gratitude to all attendees for coming and engaging with the important and complex issue of renewable energy siting. 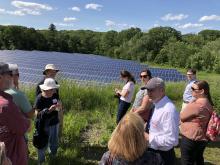 Trees in the area were clear-cut to make room for the project and to provide access to maintenance workers.

Centennial Park is home to the Slatersville Reservoir, a historic hydropower facility behind the North Smithfield Public Library.

Tom Kravitz explained the layout of another solar installation on Great Road, which was built on a former landfill site in North Smithfield.

Trees in the area were clear-cut to make room for the project and to provide access to maintenance workers.

National Park Service ranger Kevin Klyberg talking about hydro-power in Slatersville. He explained that Slatersville was the first planned mill village in the United States. Its proximity to the Blackstone River was crucial before steam power allowed industry to move away from waterways.

Erika Niedowski of the Acadia Center reviewed legislative efforts in Rhode Island to get the state on track to meet its renewable energy goals.

Here are the videos of speakers at 2019 Environment Council of RI annual meeting.

Thanks to Tim Faulkner for recording the speakers.